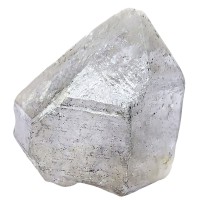 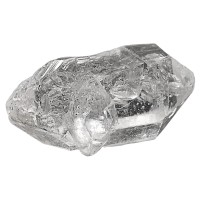 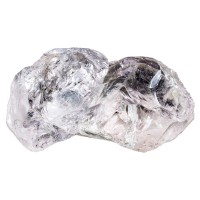 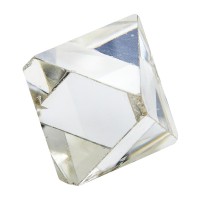 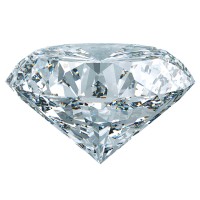 Origin of its name: Latin and Greek adamas, meaning invincible, because of its great hardness.
Diamond is a naturally occurring crystalline modification of carbon.
Insoluble and resistant to ordinary chemicals, it burns to carbon dioxide in the air due to high heat, and is slowly converted to graphite when heated in an oxygen-free atmosphere.
The diamond usually occurs in octahedral crystals bounded by eight isosceles triangular plates or in diamond-shaped diamond crystals bounded by twelve diamond-shaped plates. The crystals are always worn, their edges rounded, their faces slightly convex. The diamond crystals split perfectly according to the facets of the octahedron, a beautiful octahedron can be carved out of the rough diamond by tapping.

Zodiacs associated with diamond gemstones:
Diamond is the gemstone of the zodiac sign of Taurus and Aries.

Color variations of diamonds
Diamond crystals are transparent and normally colorless. They are also brownish, yellowish, reddish, bluish, greenish and grayish in color. Colored diamonds are rarer. The diamond also occurs in spherical, radially fibrous masses inside, such a diamond is called wine. There is also a black colored diamond, this is called a carbon emitter.

The value of a diamond
Diamonds are the most precious gemstone. It is valued for its transparency, strong light (diamond light) and the property of refracting light broken down into rainbow colors (play). The light and color gamut of the diamond together give the fire of the diamond (its refraction is very strong, its refractive index is n = 2. 40735 for red, n = 2. 46476 for violet, its dispersion is 0. 05741 is very respectable). Some diamonds glow in the dark when illuminated for a long time, phosphorescent.

Occurence of the diamond
Diamond is not found where it was formed, but where it was carried away by water, i.e. in a secondary location, in the company of corundum, epidote, anatomy, zircon, rutile, andalusite, spinel, garnet and precious metals, the rock in which sand, sandstone, conglomerate.

The oldest known Indian deposits are on the eastern slope of the Dean Mountains, and these mines are now quite depleted. It is found in old, probably Silurian sandstone conglomerates and river debris. In the province of Madras, in the Bellary region, it also occurs in pegmatite (gnaya) in the company of rubies and sapphires.

In Brazil, diamonds are found in the provinces of Minas Geraea and Bahia (discovered in 1727), and mining is still declining here. The rootstone of diamond in Brazil is the bendable sandstone called itacolumite and the conglomerate formed from it (cascalhao, tapanhoacanga). Accompanying minerals are brown titanium and ferrous minerals, quartz, jasper, tourmaline, chrysoberyl, rutile, zircon, magnetite, pyrite, gold, psilemelane, monazite. The greyish-black of the carbonado or black diamond is greasy, fine-grained, with not good cracking and greater hardness (especially suitable for drilling and grinding wheels), mainly from Bahia. The wine is a spherical, crystalline, rough-surfaced diamond. In Brazil, 13 million carats (26 q) worth of 400 million K have been mined in 150 years. The diamonds are extracted from the sand and gravel through sludge, washing and sorting.

More recently, diamond fields have been found in British Guiana (South America) under conditions similar to those in Brazil. Diamonds were also found in the sand on the border of Lapland and Russia, in the company of many other minerals; from a commercial point of view, this occurrence is very insignificant, but of greater scientific importance, because diamonds can only come from the many granite and pegmatite winters that cross the gnaya.

Dark-colored diamonds have also been found in many meteorites and meteorites. Thus, the Novo-Urei (Sept. 10, 1886, Russia), Carcote (Atakama, Chile), Magura (Orphan, etc.), Canyon Diablo (Arizona), Cubella (Spain) - meteorological falls all contain diamonds. Graphite in meteorites often shows the crystalline form of diamond (so-called Cliftonite), and it is likely that diamond will be converted to graphite during high heat.

The diamond has been known in the North American states since 1850. The largest weighs 23 3/4 carats. Golden sand is found in a secondary location in California, in the Appalachian Chain, near Lake Michigan, in Arkansas in its original location (discovered Aug. 1, 1906), the rock of peridotite (as in South Africa).

The Australian diamond fields, which have been known since 1851, are somewhat enumerated. Diamonds are found in gold washers on the one hand and in tin washers on the other. The laundries are in New South Wales and around Bingera, the latter being said to be serpentine-related, as in the Cape.

The most important diamond fields in South Africa at this time
9/10 of the diamonds in circulation come from South Africa. These are called gemstones. In South Africa, diamonds are found not only in river debris but also in karoo formation, chimney or crater-like depressions. These craters are filled with yellowish-blue-brown earth. Its mass consists predominantly of serpentine-like material formed from the weathering of a peridotite-eruptive rock, its cement is a similar material, and there are many debris in the karoo formation. This is the so-called blue ground, which thus consists of the debris of a weathered eruptive rock and pieces of broken rocks. This is the mother rock of the diamond. It is still questionable whether the diamond is an original precipitate in this rock, or whether the diamond parent rock is in the abyss and whether the eruptive rock brought the diamond with it at the time of eruption, or whether it was formed from carbonaceous shales in the pierced karoo formation. The layers pierced from the blone ground settle horizontally and consist of the following layers from bottom to top: black, sulfur-rich slate, quartzite into which diabase cores break. The distribution of diamond in the blone ground is rather irregular, with the accompanying minerals ilmenite, magnetite, chromite, garnet, enthite, olivine, zircon, topaz, and so on. Cap diamonds are considerably large and tend to be slightly yellowish-brown. The blacks are reminiscent of wine, their tissue is crystalline, and their splitting is slightly worse. Mines can be of two types: on the one hand, water mines, near waters in gravel layers, which are sometimes considerably thick (12 m), and on the other hand, dry mines, in which diamonds are dry out of the rubble without sludge. By 1892, 51 million carats (10,500 kg) of diamonds had been mined. This quantity would fill a crate about 1.5 m in length, height, and width; and is worth about 1,500 million crowns.

Use of diamonds
Diamond in the state in which it is found in its deposits cannot be used as a gem in jewelry because worn, cracked-out pieces do not have enough light and play. Rough diamonds are polished before being placed on the market. Diamond grinding is a difficult craft that requires a lot of practice. The most famous diamond grinding workshops are in Amsterdam. Because diamond is the hardest mineral, it cannot be ground with the dust of other minerals, so it is ground with its own powder. Rough diamonds cut from rough diamonds are cut into precisely defined blades with a well-defined deflection to each other.
By accurately grinding the plates, the gloss and color gamut of the diamond will be as perfect as possible.

Diamond grinding
One form of cut diamond is brilliant. Its basic form is an octahedron, the upper vertex of which is approx. halfway, lower tip approx. 1/10 part sanded; the remaining upper part of the octahedron is polished with many small sheets, the lower part with some larger sheets. This shape is cut from diamonds whose raw shape is such that it can be cut without major loss.
Another common form of cut diamond is the rosette, which is usually cut from thinner pieces. The lower half of it is quite flat, and the upper half is polished with many small tiles.

The diamond was also man-made
French chemist Moissan dissolved carbon in the iron in the electric arc light and then cooled the melt very abruptly; then a solid crust formed on the outside of the melt, while the inside stiffened under very high pressure, the carbon crystallized in the form of a diamond under such conditions, thus producing 1/2 mm of crystals.
Friedländer dissolved carbon in olivine at very high temperatures, still precipitating carbon in the form of diamonds; this is especially important because the diamond bedrock in South Africa is an olivines eruptive rock. In 1901, Ludwig A. succeeded in converting carbon to direct diamond at high temperatures under a pressure of 1,300 atmospheres. The diamond is forged with other colorless gemstones (topaz, spinel, tourmaline, rhinestone, etc.) as well as with rhinestone glass, the latter is already scratched by the steel knife and easily attacked by the edible ink (folic acid).

The value of a diamond
The size of a diamond, like its more precious gemstones in general, is not determined in grams but in a smaller unit of weight, the carat. 1 carat = 0.205 g. Its value depends on purity, transparency, color, grinding form, quality and weight. Fluorescence should also be considered when determining the value. Yellows are the least valuable. The value increases rapidly with magnitude. The value of a first-class diamond is around 250 K. 1 carat, 800 K. 2 carat, 2400 K. 4 carat, and 13,000 K. 10 carat.
Of course, valuing is not easy and requires a lot of expertise.
In addition to the world market value of a diamond, local factors must of course be taken into account, which can greatly affect the value. Such can be e.g. the import duty, but the demand-supply factor is not negligible either.