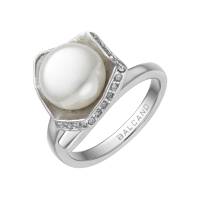 All small objects that serve as decoration are made of precious materials, metal, precious stones or enamel, and are artistically crafted.

Jewellery is as old as mankind itself, older than clothing, because man's vanity and his desire to adorn himself were already prevalent in places where lack of culture and climatic conditions made clothing superfluous. Sometimes this self-decoration manifests itself in nothing more than a ring in the nose or a tattoo on the skin, but in these cruder and more rudimentary experiments the same principle is applied as in the later, more refined jewellery collections. Highlighting parts of the body with bright, shiny, artistic effects. Jewellery is a fine art form of applied art, because it has no practical purpose, it is only for decoration, and its forms are not determined by expediency, but by the love and desire of beauty alone. As proof of its affinity with the fine arts, the jewellery design of the most artistically pure and richest times was the work of great masters.

Jewellery has survived from every era and has become a measure of the culture of certain periods.

This is not only because of its widespread use, but also because of the advanced death cult of historical times and the resistance of the jewellery material. It is made of precious metals, mainly gold, which is resistant to the erosive effects of both air and earth, or silver, which is also a durable material. It is decorated with precious stones and enamel, which have been preserved intact even on the thousands of years old pieces that have been found.

The earliest surviving jewellery comes from Egyptian tombs, most of it dating back to two thousand years before Christ.

A characteristic feature of Egyptian jewellery is its flatness and symmetry, and the related search for colour effects, achieved by using coloured glass and porcelain pieces set in metal frames that fully correspond to the effect of the diaphragm. The jewellery is characterised by the same rigorous and highly stylised direction as the great Egyptian arts.
Already 2000 years before Christ, it reaches its highest level of development, so that later technical advances no longer represent stylistic developments. The types of jewellery remain the same for two millennia: bracelets, necklaces, headdresses, which also serve to mark distinction of rank, diadems, breastplates, rings, clasps, arm and leg bracelets decorated with stones, engraved ornaments, enamel and indicating a high level of artistic development. The motifs of the decoration are mostly borrowed from mythological flora and fauna, the most common being the uraeus snake and the vulture, in addition to the lotus plant. This style survived in later Egyptian art, but it is not uncommon to find ancient characters in purely geometric shapes or used as decoration.

Wrapped jewellery does not occur, because Egyptian art demands rigidity and immobility in this area too. The most common and most characteristic is the collar-like, heavy, semi-rigid neck, composed of several members. The decoration is open-work, flat, colourful and shaped, preferably without movement, with symmetrical forms similar to those of the murals. The technique is also highly developed, and all kinds of casting, dripping, chiselling and engraving can be found on these pieces, as well as granulation, filigree, niello, glass coating imitating enamel, and even occasionally real enamel.

From the same period, we have so little of the jewellery of other Eastern peoples, such as the Assyrians, Babylonians, Jews and Persians, that we can hardly draw any conclusions.

In early Greece, jewellery was worn only by women. Greek jewellery originated under Egyptian and Asian Minor influence, but the Egyptian motifs were soon replaced by beautifully sloping geometric ornaments, mythological scenes and figurative representations. The principal jewels were crowns, rings, pins and earrings, which later became so large that it was impossible to wear them in the earlobes, but were fastened to scarves and hung low on either side of the head, and were decorated with flying genii and spindle-shaped body parts hanging on chains. On necklaces, the same kind of motifs hanging on chains are found. The bracelets were mostly single or multiple straps ending in animal heads. The wreaths imitate a foliage of hammered gold leaf. The clasps and pins are decorated with leaves, fruit, animal heads, god figures or small scenes, but the wreath was mostly plain braids of cord and ribbon. Simple, harmonious designs with noble shapes and excellent workmanship make Greek jewellery a jewel of the pentateuch.

Its form is less beautiful, its decoration is not so delicate, and it often resembles Egyptian and Asia Minor designs. The types of jewellery are the same as those of the Greeks, the workmanship is perfect, filigree and granulation are common.

The declining over-decoration of Greek art is perhaps even stronger here. From the East they adopted the fashion of wearing too much jewellery and rich ornamentation of stone, pearl, glass and amber. The mass production of jewellery brings with it a small variety of forms and artistic value. Later, there is also a barbaric influence, with gold being used in large quantities and the stones not being polished, showing affinities with the jewellery of the Migration Period.

In addition to the Roman influence, there is also a strong oriental influence, with brightly coloured enamels and lots of precious stones. The jewellery has a direct link with the outfit and is most often used as an accessory. In Byzantium, the link with religion is again strong, symbols are common, and it is here that the cross first appears as jewellery in the 4th century.

In the Renaissance, jewellery is again very prominent, but only in the elaboration, the mythological subject and the grotesque. Filigree is no longer made, and gold is no longer used, because it is covered with niello, enamel and precious stones. The main types are chains and locusts. The chain, used as a necklace and belt, is sometimes made up of finely worked buckle or buttercup-shaped sections. The variety and the rich, delicate workmanship of the mantelpieces is admirable.

In the 17th century, the richness of Renaissance jewellery art begins to decline, the taste for variegated coloured enamelled ribbon ornaments is discontinued and the emphasis is on the quality and validation of the stones.

In the middle of the century, the diamond becomes fashionable, even more overshadowed by the jewellery, the setting is often silver, and to highlight the diamond is black enamelled. The shapes are geometric, rigid or taken from Baroque art. The taste of Mazarin and Louis XIII was responsible for the rise of diamonds and, in general, from the 17th century onwards, France took over from Italy.

The Rococo style, with its delicate shell and foliage decorations, which came into fashion under Louis XV, had a positive influence on the development of jewellery. The stone is still the most important part, but the setting also plays a role again.

The end of the 18 th and the 19 th centuries also pushed jewellery into the path of the old arts, which were weak and artless.

Mass production and many imitation forms have produced worthless and template-like results. In the middle of the 19th century, the Germans in particular were already trying to free themselves from the French influence and tried to counteract the predominance of diamonds and other stones by imitating Renaissance jewellery. At the end of the century, the use of natural and highly stylized plant forms displaced the historic forms, but these highly curved Art Nouveau forms were also only temporary.

Since the present century, a simpler, nobler, modern taste has developed.

Both in Germany and France, and independently of each other, more modern jewellery was produced. The emphasis in jewellery was again on design and form. The use of gemstones, and diamonds in particular, has not been abandoned, but the natural, simplified forms of these are still used.

The necklace was an ancient and very popular piece of jewellery.

Mostly made of pure gold and decorated with a wide variety of precious stones. The neck dart is also decorated with butterfly dangles. In the 17th century, the fashion was for a neck wreath with rose butterflies. Similar jewellery was the necklace and the throat clasp. The latter were narrower and fitted tightly around the neck and throat. Some were richly decorated with precious stones and pearls. From the necklace was always dangled one or more pendants of locust or other kinds of appendages. The word "manna tree" has been interpreted in several ways. Most often it was used to refer to the piece of jewellery that hung in the middle of the necklace. Judging from descriptions and surviving examples, these were the masterpieces of Hungarian jewellery.

The signet rings were made of gold, silver and steel

The more wealthy wore rings with engraved gems. Individual rings were sometimes of great value. The gold chain was very popular. In addition to chains with Spanish and French pearls and precious stones, gold chains made in Hungary were also popular. There was hardly a lady who didn't carry a few pieces in her dowry box. The men wore them too. Some even hung heavy gold chains around their horses' necks. Enamel gold chains with beads set between the gold chain links were very popular. They also wore crosses on the chains and, from the 17th century onwards, pocket watches. Pocket watches were not yet made in this century, but expensive pocket watches were often worn in this century, even if not in general. The wearing of different types of belts (sash belts, chain belts, cushion belts) was also very popular. Both men and women wore gold, pearl and gemstone belts.