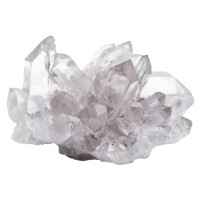 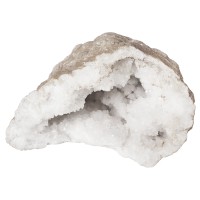 A crystal is a natural formation bounded by regularly spaced planes, which is homogeneous in its material and whose shape and material are closely related. At first, it was understood to mean only quartz crystal, which would have been the most solidified water from the fires of the heavens, but later the word was applied to all kinds of crystals.

A crystal is formed by particles of matter being placed next to each other according to a certain rule.

Crystals can be formed by sublimation, in other words the vapour of the material condenses as it cools and solidifies into crystals. A crystal can also be formed by the interaction of two gases or vapours to form a new substance that is deposited in the form of a crystal. In nature, crystals are formed in these two ways, mainly in volcanic regions, from vapours and gases rising from deep within the earth.

Crystallisation can also occur by the interaction of two different molten substances, or by the introduction of a substance into a solution that precipitates the dissolved substance and forces it to crystallise.

The crystal can be further developed in the same material, because new material is deposited on top of the already developed sheets, i.e. the sheets are pushed outwards, parallel to themselves. Crystals of isomorphous compounds (e.g. alum salts) can be grown in solution with each other. In most cases, the growth of crystals is not equal in all directions, i.e. not equal on all tiles, because most crystals are distorted or only the skeleton is growing. No matter how distorted a crystal is, the angle of its faces to each other remains the same, and so this is the primary consideration when examining the crystal. The angle of deflection is measured with a goniometer, a crystal angle meter.

In nature, a crystal is formed either by growing freely in all directions in a mobile medium (gas, solution or melt), or by growing on a solid base, where it can only grow at the free end. In the former case, we are talking about an overgrown crystal, in the latter case an adult crystal. Grown crystals are formed in complex crystalline rocks as their constituents, adult crystals are formed in cavities and cracks in the rocks. In most cases, the ingrowth crystals are grown in the same way at both ends, and only rarely are the two ends found to be differently grown. Such crystals are called semiformed or hemimorphic crystals.

The size of the crystals depends on the specific properties of the material being crystallised.

The crystals of most substances are clearly visible to the naked eye, but there are some substances whose crystals can only be seen with a microscope, called microlites and, if slightly larger, crystallites. If in a solution or melt the crystals are prevented from growing freely, or if there is insufficient time for them to grow, only some crystal faces will grow, but the forms bounded on all sides by planes will not form. Such mineral masses are called crystalline, e.g. marble or most volcanic rocks.

The vast majority of materials can crystallise, and there are relatively few materials that solidify in an amorphous state. The variety of materials means that the number of crystals is also very large. If all the tiles on a crystal are the same, it is called a single crystal, and if there are several tiles, it is called a crystal combination. Most crystals are crystal combinations and relatively few of them are single crystals.

Even with this great variety, crystals can be classified into a few groups (systems).

According to the number of planes of symmetry and axes, 32 crystal classes are distinguished, which are usually grouped into the following 6 crystal systems:

Only crystal forms of the same class can occur on a given material. Crystal shapes are usually referred to certain imaginary lines (passing through the centre), called crystal axes, which coincide with the axes of symmetry. So the crystal axes are in fact the axes of a coordinate system, the pieces (parameter) cut on the coordinate axes define the shape of the crystal. On all crystallised materials, these cut-off pieces are rational multiples of the sections of a certain basic shape. And the basic shape is different and specific to each material, and by its symmetry and shape we mean the crystalline crystal elements of that material.

There is also a relationship between the shape of crystals and their other physical properties and chemical composition.

Every plane of geometric symmetry is also a plane of symmetry with respect to other physical properties. This is particularly striking in terms of fission, optical behaviour, thermal and electrical properties. In terms of electricity, there are good and bad conductors. Bad conductors are quartz, sulphur, in which electricity (pyroelectricity) can be excited by rubbing, pressure, etc., but mainly by heating and cooling. If the crystal is flawless, then the distribution of electricity follows the symmetry, with the same charge at the equivalent ends and opposite charges at the 2 ends of the hemimorph symmetry axes. The end of the crystal that receives a positive charge when heated becomes negative when cooled and vice versa.
If the cooling crystal is sprinkled with a mixture of fine aluminium and sulphur dust, red aluminium adheres to the negative pole and yellow sulphur dust to the positive pole. In this way, hidden twin clusters can often be detected. Conductivity is also related to symmetry, with the same conductivity in equivalent directions and different conductivity in different directions, but these differences are usually small. The conductivities of chemically isomeric and physically allotropic bodies are very different, with isomorphic bodies hardly different.

With regard to the thermal properties, it should be emphasised in particular that the bodies in a regular system are equally distributed in all directions. In the other systems, the expansion varies in different directions, so the angles formed by the sheets also depend somewhat on temperature. However, as the temperature rises, the symmetry does not change and the parallel plates and edges remain parallel.